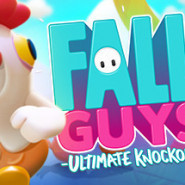 Fall Guys Ultimate Knockout is a fresh multiplayer party game that combines a 60-player battle royale with a linear 1st-person 3D platform action to deliver a brand new experience. You can play this fast-paced jelly battle with a team of friends or jump into a random online room solo and play with real players from all over the world! The game is currently available for Windows, Xbox One and Series X/S, Nintendo Switch, and PS 4.

The gameplay of Fall Guys is extremely catchy. You can create a colorful character and spawn on the track right away. All the matches include multiple rounds with various mini-games which you have to complete to pass to the next round. The players who don’t manage to complete the quests in time are disqualified. That’s not all challenges on your way, though! Get ready to bump and get bumped fiercely! As everyone will try to know you off the platform to slow you down, you have to do the same to reduce the competition. A smart strategy is really needed to reach the final round and fight for the first place. Surprisingly, it’s not always a good choice to be the first from the start to win. Sometimes, you need to leg behind not to end up being knocked down by a bunch of other players.

It’s Made of Jelly!

One of the coolest features of this game is physics. All the characters not only look like candies but are also made of jelly, which makes them very clumsy and sometimes sluggish. However, it’s not difficult to get used to the controls at all. Just run forward and knock everyone you can to clear the route! The rest of the graphics is awesome as well. The game looks polished and it’s super-vivid, so both adults and kids will enjoy playing it. All the available platforms support controller input, so it’s very convenient to play with several friends using a single device. If you are a PC gamer, you need 8GB of RAM, NVIDIA GTX 660 or AMD Radeon HD 7950 or higher, and Intel Core i5 or better.

Fall Guys Ultimate Knockout is currently the best party game you can get for your computer and consoles and the only battle royale party game available! Invite your friends and get ready for hours of unstoppable fun. You’ll definitely need a bunch of snacks and beverages to keep playing! The game is bright, colorful, easy to pick up, and lets you personalize your character to make things as funny as possible. Content updates come out every 2-3 months, so you won’t get bored by competing on the same tracks all the time.