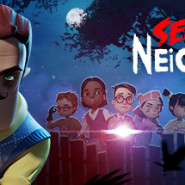 The game is replayable because it has different levels. The game has a replayability of 7/10.

A pretty good game that's worth it if you want to play with a friend, but the game's graphics and multiplayer are pretty bad.