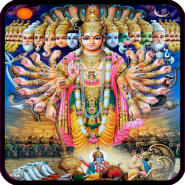 Free
Get App
To install this application you will get a link in the Official Store
1.0

Sri Vishnu Sahasranamam contains 1008 Names of Sri Mahavishnu. This entire compiling was done after the Mahabharata war and

Saint Vyasa Mahamuni wrote the entire versus with answers for the queries raised by respective personnel they were part of that time.


Every Name of Sri Vishnu has a meaning to it; quite apart - the phonetic vibrations by chanting each Name known as "Nama" and the

wisdom. What the phonetic sound vibrations create to the chanter or to the one who hears it is very well established by many eminent

scholars. For attainment of spiritual liberation, one must involve himself/herself to the glories of the Lord Sri Mahavishnu, by reciting the

into one's own body. Besides, the thought and thinking of a person can also be regulated to divine path.

The birth of Sri Vishnu Sahasra Nama - The 1008 Names of Sri Maha.

The legend would have it that at the end of the epic Mahabharata war, Bhishmacharya was awaiting the sacred hour to depart from his physical body unto the lotus feet of the Lord. Yudhishtira, the eldest of the Pandavas, was desperately looking for the answers to matters relating to Dharma and Karma. Lord Sri Krishna, who understood Yudhistira’s uneasy mind, guided him to Bhishma to learn insight in to this precious knowledge. It is relevant to mention that Bhishma was acknowledged to be one of the twelve most knowledgeable people. The other eleven being Brahma , Narada , Siva , Subramanya , Kapila , Manu , Prahlada , Janaka , Bali, Suka and Yama .

The main body of Sri Vishnu Sahasranama consists of 107 stanzas which contain the one thousand names of Sri Maha Vishnu. Every one of the one thousand names is full of significance and refers to one particular guna (quality, characteristic, or attribute) of Paramatma. These names invoke a sense of bonding with the Lord. The meanings of the names give us an understanding and depth of God as there is a deep connection between the name and the named.

Those who do not cleanse their mind on a regular basis become mentally ill over a period of time.. Prayers are a means to mental cleansing when they are chanted with sincerity and devotion. The importance of chanting Sri Vishnu Sahasranama is that the deity being worshiped is none other than Vasudeva. Sri Vedavyasa, who was responsible for stringing the naamas together in a poetic form, points out that it is by the power and command of Vasudeva that the Sun, the Moon, the stars, the world and the oceans are controlled. The whole universe of the Gods, Asuras and Gandharavas is under the sway of Lord Krishna. In Bhishma’s expert judgment, chanting Vasudevas’s name with devotion and sincerity will ensure relief from sorrows and bondage. The person who recites is not the only one who benefits, but also those who for whatever reason are unable to chant benefit by just hearing the chanting as well.
Read more